This weekend I went to a delightful performance of the Coffee Cantata.  Despite growing up in a family with plenty of classical music, I had no idea that Bach wrote music about coffee of all things.  I didn’t even know Bach had coffee, although thinking it through, it does make sense with the dates. It just never occurred to me.

The humorous cantata follows a concerned father, complaining his daughter thinks of nothing but coffee and keeps lying to him about giving it up.  The daughter then sings, “Coffee! Coffee!” in beautiful baroque music.  The actors did a marvelous job of catching the humor as well as performing the difficult music.

Since the whole performance was in a coffee shop, I had planned to write, but just ended up drinking a lot of coffee and watching.  I can’t find anything to regret though.

I’ve decided to do Camp Nanowrimo, at the urging of Zoe, my writing group partner from last November.  This year camp is in April, (also July for anyone interested in doing it) so next week I’ll be diving into drafting again. Looking over MAAV, I’ve discovered most of last November’s drafting is useless, sigh. But at least in writing out plot points on cards and moving them around, I think I have a new and improved outline.  I’m excited to try doing Nano over again and hopefully end up with a workable draft this time.

To help firm up my outline and hash out a book I feel good about, I’ve started in using the Writing the Breakout Novel Workbook, that my husband got my for Christmas.  The first exercise is on heroes.  What I realized after doing it for MAAV, was that I picked a completely different hero to list than when I did the same exercise for DB in December right after getting the book.  At the time I didn’t think about it, but comparing the exercises afterwards I was fascinated and impressed.  The hero I’d picked this time (my great grandmother) had the perfect qualities for Danny, the MC, while last time (Ursula LeGuin) had a completely different set of qualities that I admired that worked much better for Dragon Boy.

I guess coming to the exercise with the book in mind gave me a whole different mindset thinking about the same idea.  In both cases, the exercise helped me flesh out heroic qualities to build on in the opening scenes of my book and I hope to avoid ever having the same likability issues with my MCs that I had on a different project.

I’m hoping to return to wonderful coffee, and this Thursday at writer’s group with Zoe, this time actually work and dive into the next couple character exercises in the workbook.  After all, everything is better with coffee!

As my husband’s job search started seriously encroaching on my life this week, I ended up doing a lot of not-exactly-writing activities.  It’s more a stress issue than a time issue, which means in my off times I need something physical and somewhat relaxing to do, as in a craft, rather than writing.

Never one for doing the same thing twice, I decided to take a break from the Sylvanian wardrobe and instead tackle character building.  And by literal I mean out of sculpy.

I’ve had the idea for a long time, inspired by my roll-playing (yes, I’m a geek) with some of my characters with a friend.  My character and hers in an overly geekish geekiness have decided what they like to do best is meditate together.  Hers is a Buddhist nun and mine is a troll priest, so I suppose there is some basis for the craziness (just slightly).  Anyway, I’ve always been a fan of little praying monk statues, both Eastern and Western, so I thought I’d try my hand at making the two of them, Buddha style, but with a twist.

I wanted to make them able to hold hands.  Logistically, you can hold hands up and down or side to side, and that meant their hands might look a little funny when separate so after a lot of consideration I decided to give each of them one hand up and one hand down, so they’d fit together but not look too crazy on their own.  Plus, it sort of puts them on equal footing.

I’m a bit out of practice so that the sculpting was a bit tricky, especially the faces.  I was a bit discouraged first that Nyima looks like a boy (until I noticed all pictures of Buddhist nuns look rather boy-like for us usually reading “girl” by the hair) and even more discouraged at Kathul’s fur (gah! stupid fur!).  He ended up a bit too tall for his ears and I still feel like his face isn’t quite right (this is the drawing version of him) but close enough for a first attempt.

These figures are solid, but I think I’ll put tin-foil in them next time, I had a little crack in the sides from cooking them, but the paint covered it up since it was pretty small.  At this point, I feel pretty pleased with them, although I have new admiration for all the factory workers in China who paint toys.  My goodness painting the details was tricky.

I also tried to start my Newberry practice program I talked about last week.  I discovered, however, that Newberry books from the 1920s are hard to come by.  The library had neither “The History of Mankind” nor any of the 1922 Newberry honor books.  There were hardly any of the rest of the books from the 1920s forcing me to give up my idea of going in order.  I haven’t yet decided I want to own all the Newberry books, but suspect if I’m going to read them all I’m probably going to have to buy them all to find them.

So, banishing the plans of a chronological approach I just took home a stack of a bunch of the ones I haven’t yet read.  Reading them is easy (on the third one) but how to practice with them? A much more difficult question.  I thought about trying to rewrite some of them or parts of them like Benjamin Franklin, however, fiction is very different from essay writing.  Styles very so much and I feel like while not stunning, my style is at least solid.  The styles of the Newberry books range so drastically, it makes me think it might scatter my brain a bit to try to copy them all, not to mention it doesn’t begin to touch on some of the things I care the most about in good fiction. Character development, plot, theme, tension, or symbolism.  Fiction is complicated. 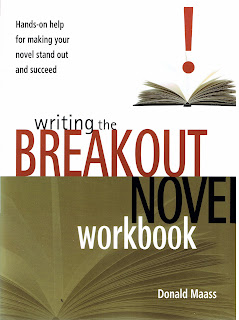 This time, however, the library was actually helpful, in the for of Donald Maas’s “Writing the Breakout Novel Workbook.”  This thing just oozes practice. I grabbed it to help structure one of my rough drafts but got ancy after two exercises.  Hello, sounds like piano practice type annoying-ness to me (never could sit still for those 30 min I was supposed to practice).  And I can’t say I’m raring to work that hard, which means its perfect.  If I do the exercises with each Newberry book I will figure out why these books won, vs other similar books.

And it will be that much easier to put my own book through the workbook and see how it measures up.  Maas has done a lot of research for me on what makes a terrific book, the Newberry books are sure to have all his elements, and so while it sounds like way too much work, I’m also excited to have a plan.  To make myself do it, I’m going to aim for 30 min a day working through it.

That will be extra hard though, because my husband has just landed a terrific job in Hood River (He graduated in December with a degree in Electrical Engineering.)  So we’re moving!  Ack!  It’s exciting and a bit terrifying of a prospect, especially for having done so much of it lately between school and his internships.  I get to go apartment hunting most of this week, then moving as soon as possible.  Still, I can’t think of a more gorgeous place for a writer to live. Mountains, waterfalls, the Columbia, and all the massive amount of weather of various types that moves through it. I hope to spend a lot of time hiking around between writing (that whole sitting kills you thing) and can’t wait to get all settled in.

Also, I’ve joined “Read an E-book Week” promotional sale on Smashwords.  You can pick up “A School for Villains” at 50% off through March 10th.